We regret to inform you that one of our members, Alex Brenninkmeijer, has passed away. Alex was an ardent defender of citizens’ rights, having advocated tirelessly through his career for democracy, the rule of law, and the rights of citizens against their governments. Alex was admired internationally for his work by academics but by citizens also. Since 2014, he was a Faculty Professor at Utrecht University. The University has also offered its condolences, highlighting Alex’s long, illustrious career of championing citizen rights.

Alex was very important to the foundation of JMN EULEN, offering support and advice in many different ways. Alex chaired our opening conference in Brussels in February 2020. He has recently written on our blog about the Dutch tax benefits scandal, the exact type of event that he had been warning about for years.

Our network became better because of his involvement, and his death is a great loss to us all. He was known by his colleagues for his immense kindness and creativity, and he served as an inspiration to those that knew him.

Our condolences are with his wife Sacha, family and many (academic) friends at this difficult time. 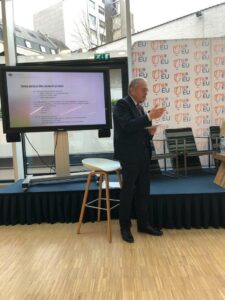